My Magnolia Tree published by Future Generations Cymru, commissioned for Everything Change, a series of events by Taliesin Arts & Swansea University connecting creativity and the climate.

When I Speak of Bravery commissioned for the unveiling of Betty Campbell’s statue, the first statue of a named Welsh woman in Wales. Available to read on Wales Arts Review.

Unpacking published in One by Jacar Press

In Bloom published by Lucent Dreaming

Fasting published by The Cardiff Review

Blues published by Ink, Sweat & Tears (Shortlisted for Pick of the Month) 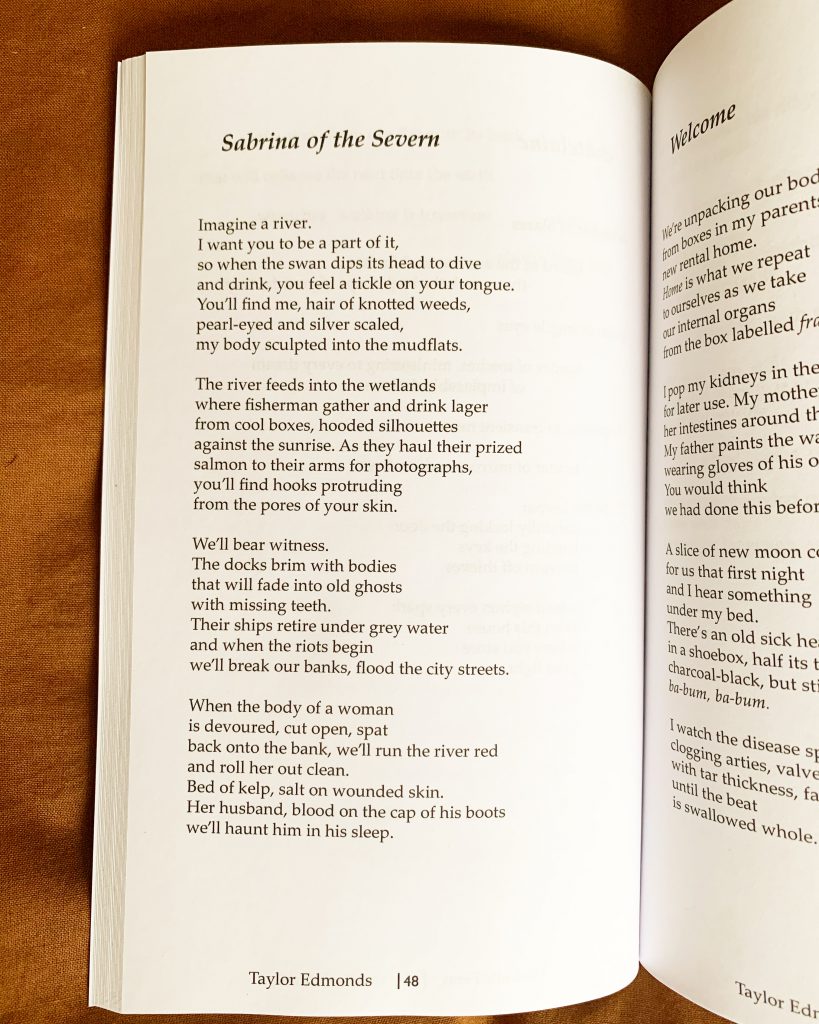 I’m currently the poet in residence for Sophie Howe, the Future Generations Commissioner for Wales. During my year-long residency, I’ll be creatively communicating the Well-being of Future Generations Act and its causes, driving the importance of arts and culture and advocating for the act.

As one of three poets selected by Poetry Wales, in Spring 2022 I’ll be working with the magazine in a development position, learning the ins and outs of the process from submissions to publication, as well as contributing to the editorial of an issue.

Writing for Joy is a new monthly series of creative writing workshops held on Instagram Live with the aim of making writing more fun and accessible by exploring joy, reflection and creativity.

Teaming up with writer Nasia Sarwar-Skuse, we’ve curated a new series of monthly creative writing workshops for the women who are part of the Aurora Trinity collective, aiming to introduce participants to writing for self-expression and wellbeing.

A project to introduce primary school children to developing their creative voice and informing them of the functions ofWales’ Senedd. Through a series of creative sessions with a number of schools in Summer 2021, I’ll be encouraging pupils in the importance of using their voice through poetry.

A collaborative project between theatre company Fio and charity Women Connect First, Unheard Voices shares intergenerational stories as part of a development project. To assist with the poetic element of the project, I edited the work that forms a Zine of poetry created by young women, inspired by the life stories of older women, and held 1-1 feedback sessions.

To be released in April 2021, I curated a podcast episode as part of publisher Parthian’s new series on queer Welsh writing. The episode focuses on queer Welsh poetry, exploring the scene in Wales, links between queer identity and writing and more with a series of special guests.

Nescio Ensemble Welsh Tour – Spoken Word performer I joined Nescio Ensemble, a classical string orchestra from the Netherlands on their week- long Welsh tour as a spoken word performer. We spent time creating a set which merged my words and their music together and played a series of gigs over Wales. The tour aimed to make classical music accessible and push the boundaries of our genres through collaboration.

Call of the Severn – Audio Story – The Severn Estuary Partnership

Call of the Severn, co-written with Lucy Smith for the Severn Estuary Partnership, is an immersive audio story that explores the magic of the Severn Estuary. Call of the Severn was created as part of a project that aims to connect coastal socio-economically deprived communities to the Estuary and promote wellbeing. The project involved research, running community sessions in Grangetown, Barry and Newport, as well as writing and recording the story.

I was one of three awarded a Rising Stars 2020 award by Literature Wales and Firefly Press, a scheme open to poets of colour writing for children. As a recipient of the award, I received a cash prize, the opportunity to shadow the Children’s Laureate of Wales at a school workshop session and publication.

‘Voice’ was a series of community creative writing workshops I co-delivered with Nasia Sarwar-Skuse. The workshops were for people of colour, exploring and developing the creative voice of participants through learning and participation, as well as studying the works of writers of colour. The workshops were supported by Literature Wales’ Platforming Underrepresented Writers Scheme.

Hunan-Iaith is a bilingual project between Where I’m Coming From & Y Stamp that aims to bridge the gap between language and translation in our communities. As well as facilitating and curating the project as a Where I’m Coming From team member, I will also be contributing and translating work. The project received funding from the Arts Council of Wales to develop a pamphlet, glossary of terms created throughout the project and unconscious bias and anti-racism training for Welsh organisations.

I was chosen to sit as an external panel member for the Arts Council of Wales to advise and curate their Welsh showcase for the 2019 Edinburgh Fringe Festival. This involved going through applications, discussing and advising with the board and creating their ‘Seeding For the Future’ initiative. I also attended Fringe as an ambassador for the programme.

Articles, Reviews and Other Publications

5 Black Womxn You Need to Know About in the South Wales Creative Scene, published by Black Ballad

In Conversation with Kima Otung, published by Black Ballad

Finding Voice, essay in Just So You Know, published by Parthian Books

How I’m Connecting with My Welsh Identity in my Twenties, published by Black Ballad